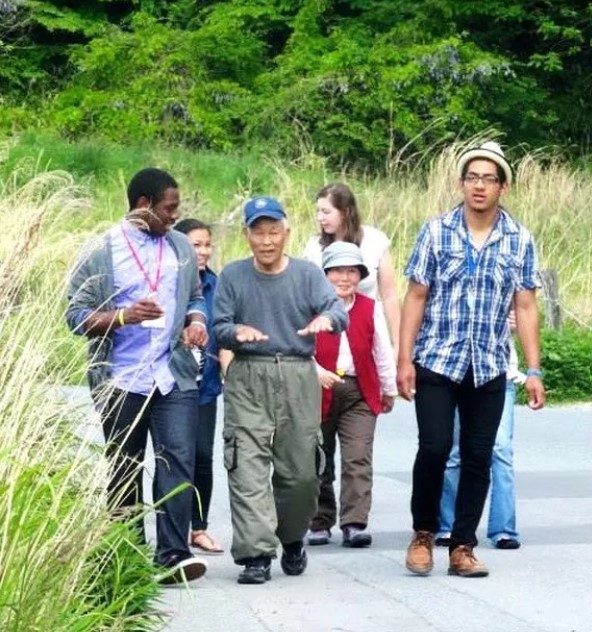 Roxboro Community School (RCS) alumni Khari Johnson has led an interesting life since leaving the familiar hallways of RCS. Johnson graduated in 2012, moving from the small town of Roxboro, North Carolina to Tulsa, Oklahoma, to study at Oral Roberts University (ORU). ORU is a Christian, liberal arts university that focuses on education and putting spiritual faith into motion by serving the community and traveling domestically or internationally in service.

“The main reason I went was because of the religious background, it’s Pentecostal. I met a lot of cool people and famous pastors while I was there,” said Johnson. Johnson majored in Christian counseling when he first started, with a minor in psychology. “The first year I went there I got involved in ORU Missions, so I did my first mission trip to Japan in the summer of 2013,” continued Johnson, “That mission trip changed my life, because I fell in love with the country.”

After realizing his passion for helping others, Johnson went back to Japan this past summer for another month-long mission trip after finishing his sophomore year at ORU. Johnson said, “We went there specifically to preach about Jesus and the good gospel, but at the same time we went there to help with the tsunami relief. “The tsunami that hit in 2011 devastated a big part of the country, especially one area, Fukushima, a prefecture in Japan,” continued Johnson, “It wiped away everything -- homes, businesses; thousands of people died.”

Due to explosives in chemical power plants, radiation was brought out amongst the city of Fukushima, forcing people to evacuate the city. Johnson was able to visit the area abolished by the tsunami, receiving a glimpse of the wreckage that used to be a thriving city. “Everything was different. Japan is kind of like the U.S. when it comes to being modernized, and in many ways, Japan is more modernized than the U.S., but disasters are still disasters no matter where you are,” said Johnson.

Johnson was assigned to work on small tasks projects, aiding in clearing the wreckage for those who had lost everything. “We helped one man and his name was Mr. Suzuki, he was an elderly man, his rice fields were dead because of the chemicals from radiation, so we went and helped him plant new seeds and farm,” he said.

The ORU students were there through a Christian organization called Global Missions Church in Japan. Johnson said he and several others prayed over the area that was destroyed. “In my life, what really changed for me is how I see people. We can be so blinded when we don’t get outside of where we live,” he said, “Sometimes we surround ourselves in our own environments and forget that there are people all across the world going through things much worse than we could ever imagine.”

Before going to Japan, Johnson said he didn’t think about the well being of others, but visiting another country showed him that there’s life outside of oneself. The language barrier became an issue for Johnson when attempting to share the gospel with others. “It [communication] was something that stressed me out, because you just wanted to tell someone something but they couldn’t understand you,” he said. “I’m actually [now] learning the language, and I hope to be fluent in Japanese one day.”

Both mission trips were student-led, and the second time Johnson returned to Japan, he was nominated to be one of the student leaders. He said, “The people that I went with, their personalities were so different, but when you stick 12 people in a different country together, you tend to get close to one another.

“I definitely want to go back. I feel like I don’t even belong in America; sometimes I tell people I’m Japanese now,” said Johnson. One of the best memories Johnson had is when his group visited a middle school where the students were unable to speak or understand English. “Our translator just told us to show them the love of Christ, and so that’s what we did,” continued Johnson, “By the end of the day [within three hours], they were hugging us goodbye and some were crying.” It was a powerful moment, showing that no matter where you come from or what culture, love speaks the same language,” Johnson concluded.