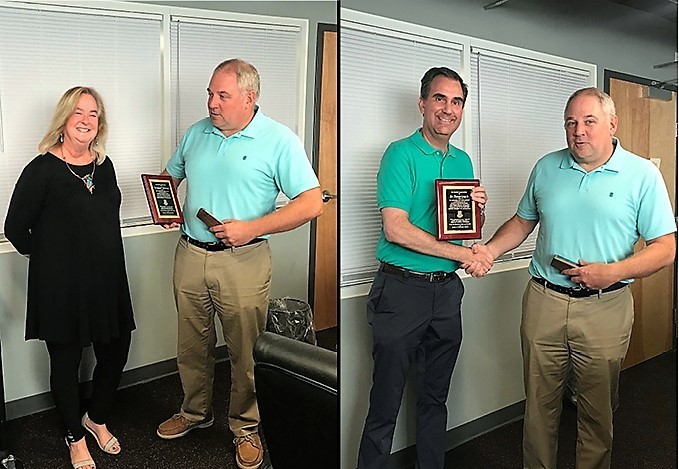 During the September 9 meeting of the Roxboro Community School (RCS) Board of Directors, two retiring members were honored.

Dr. Kimmie Yarborough had served on the RCS Board from the school's beginning in 2006. She was instrumental in RCS's opening and beginning years, and has been active in governance and other areas throughout her 13 year-tenure on the Board.

Dr. Yarborough is also a RCS parent. Her sons, Trent and Lance, graduated in 2013. Her daughter, Bryce, will graduate in 2020.

Saying she had enjoyed every challenge and reward that came with founding and overseeing operations of a charter school, Dr. Yarborough told current Board members to never shy away from the challenges and to always enjoy the rewards that come with being a part of the school leadership. She added that she was certain she was leaving RCS in good hands.

Dr. Thomas Long Jr. served on the RCS Board during the five-year long Raise the Roof Campaign that resulted in the final phase of renovation on the historic building housing the school. Dr. Long's guidance and leadership was invaluable in garnering community support that resulted in pledges of $1.6 million to provide RCS students a gymnasium, multipurpose room and additional classroom and storage space.

Dr. Long's daughter, Kayleigh, graduated in 2017. He said he was grateful for the opportunities she was afforded at RCS, and cautioned the current Board members to always keep the needs of students first and foremost.

RCS Board of Directors Chair Walt Rogers presented plaques to Long and Yarborough while thanking them for their many contributions to the school.