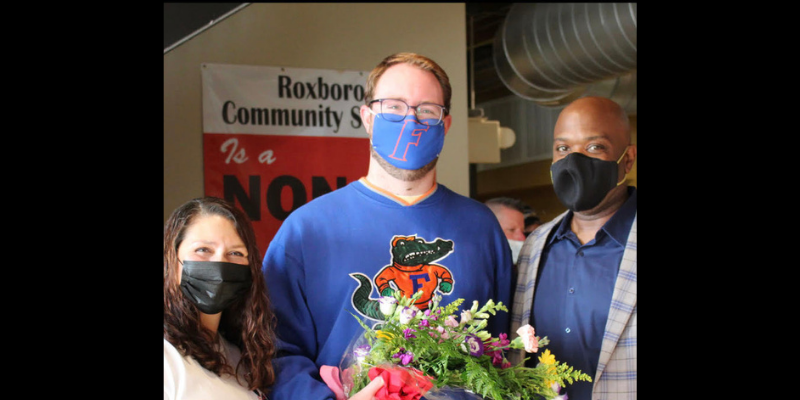 During a mini-concert by the RCS High School Band, 2021 North Carolina Teacher of the Year Eugenia Floyd and RCS high school Principal Darkarai Bryant made the announcement that Storrs was the third RCS teacher in the school’s 16-year history to receive the honor of NC Charter Schools Teacher of the Year. He follows in the footsteps of high school science teacher Ashley Bailey, who held the honor in 2020. Retired high school English teacher Wanda Ball was named in 2007.

Bryant said of Storrs, “Upon interviewing Mr. Storrs six years ago, I knew he would be a perfect fit for RCS, and my intuition certainly did not serve me wrong. He has been a great addition to the RCS family, not just as a teacher but in non-teaching roles as well. He has hosted the RCS in Spain program; he supports our performing arts program behind the scenes as well as performing; he is nurturing in relationships and supports other teachers. He is a great asset overall,” Bryant said, “and it is an honor to have him on our team.”

Immediately after today’s announcement, Storrs said, “It’s not even real life,”  when asked how he felt. He then said he was excited to see what the year ahead will bring. “I know how rewarding it was for [Bailey]”, he said, adding that he was looking forward to “meeting a lot of excellent teachers and learning tons of new things.”

Storrs has taught at RCS for six years. For three of those years, he has led a group of students on a trip to Spain. A fourth RCS in Spain trip is planned for this spring. Storrs said he enjoyed making the trip because it allows students to experience “different cultures and lifestyles and ways of thought.” He added, “I want to bring as much of Spain as possible to my students. It can make them citizens of the world, not just citizens of Roxboro.”

He said the most rewarding thing about teaching is to see students “open up” to those new experiences and learn to “think for themselves, not only in class but while abroad” and in other situations.

Storrs said he thanked “the entire administrative team” at RCS, including Bryant, Academic Coach Melanie Winstead and Managing Executive Director Dave Ebert, “for the amount of trust they put in me. They let me do my job and don’t try to micromanage. I couldn’t do this without the people around me.”

He offered “a special shoutout” to Bailey, whom he said had supported him during the entire process of competing for the NC Charter Schools Teacher of the Year title. “She has been a wonderful mentor and friend,” he concluded.

He will go on to compete for the North Carolina Teacher of the Year.