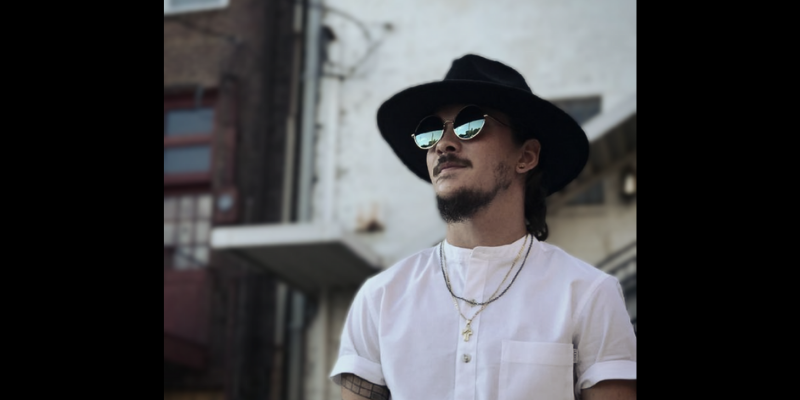 From RCS to Apollo Theater and Back, Huff Shares Musical Talent

Matthew Huff graduated from Roxboro Community School (RCS) in 2014 and has since been hard at work completing college and launching a successful music career. He credits the school staff for playing a big role in his success as a musician.

Huff recently released his second album, Bones, which is available on Spotify, Apple Music, Amazon Music, YouTube Music and Pandora. In addition to recording, Huff shares his jazz/folk/blues talents at local and regional venues such as Black Creek Brewery and Tunnel Creek Vineyards in Roxboro and Bright Penny Brewing, Hyperion Bar and Lounge and Melomaniac Coffee Shop in Mebane. He also performs around the Triangle region and in Virginia. To give back to his community, he has volunteered his time and talent for local events, such as a fundraiser for Animal Protection Society of Person County.

While he enjoys all his gigs, Huff said, “The most memorable so far wasn’t a gig, but an audition. On Sept. 21, 2019, I was given the opportunity to audition at Apollo Theater in New York for the chance to perform [there] on Amateur Night at Apollo. This prestigious theater is where musicians such as Ella Fitzgerald, Michael Jackson, Prince, Quincy Jones and so many more got their start! Out of over 300 contestants, I excelled during that audition, and was asked to come back and perform in April 2020.  I have not yet gotten that chance, but as they open back up, I now wait for my call back, for the chance to prove myself, and to complete that adventure.”

In addition to writing and performing, Huff also teaches music in Roxboro. While at Queens University in Charlotte, he majored in music performance and minored in guitar pedagogy.

Huff explained, “While writing and performing music is my true love, I know how hard it can be to get started. So I decided in the past few years, I wanted to help others express themselves through music, by teaching. My goal was not to teach individuals just how to play a song, rather to give them the tools necessary to pursue writing and understanding music.”

When asked about his time as a student at RCS, Huff said, “I can honestly say, while I am aware I was never the best student when in high school, the community in that school always supported my musical endeavors. There was never a time where I was discouraged from playing, singing, performing, or pursuing music. The students and teachers always pushed me to continue writing, to go to college, to pursue music. I suppose they could see my love and dedication. And because of them, I did exactly that.”

He continued, “There are so many people to thank from that school: (teacher) Megan Wright for keeping me on the right track, my friends for listening and encouraging me to keep pushing and writing, and the whole faculty for never doubting me. I do owe a lot of my success to former band director Eric Swanson,” Huff said. “From Jazz Ensemble, Drum Line, awarding me the Quincy Jones Award my senior year, and spending many days after school asking me how my music was going, he pushed me harder than anyone I know, and I’ll always be grateful for that.”

Discussing his recording career, Huff said, “When I was in high school, I recorded, produced, and ‘self-released’ my first album, Wreckage. I would walk around asking teachers, students, friends, family, and strangers to listen to what I had created! Looking back, it wasn’t my best work by any means, but that’s how you learn: by doing.”

Huff began performing in children’s choir at age six and in praise bands at 13. As a freshman at RCS, he began performing his own music. “Whether it was open mic, just for friends, or talent shows, I pursued every opportunity to perform my music for any and every one,” he said.

Huff’s Person County roots run deep. “I am deeply rooted [in] and devoted to this town,” he said, crediting a strong support system for his work ethic and success.

“My father, Barry Lynn Huff, was born and raised in Roxboro. Every day, he reminds me that your name is behind everything you do,” Huff explained. “He has the strongest work ethic of anyone I know, and never fails to impress me with his strength, love and support. Whether it’s stories of his childhood and pulling tobacco, working on the farm together, or playing pool and talking late into the night, he has always shown his love and support.”

Huff’s mother, Jennifer Scoville Huff, “grew up in Ohio and moved here,” he said, “in love with my father and farming.  She has blessed me with the reminder to think outside the box, travel, embrace and love every culture, and never give up on what you love. Whether we are baking together, talking late into the night about whatever is on our mind that day, or dancing to Moontricks, she keeps me grounded and on the right track.”

He said his sister, Michaela Huff, “grew up with me under the same roof, under the same shooting stars, and under the same loving parents. She was always the voice of reason, the shoulder I could lean on, and the ear that would listen. There was never a time where she didn’t push me to be the better version of myself. Whether we were playing in the dirt, climbing trees, or watching Disney movies, she always expressed her love and support for me and my music.”

Huff met his girlfriend, Bailey Nicole Hunt, in the music department at Queens University. “While away from home for those four years, she was my best friend who kept me on the right track,” he said. Hunt runs a music therapy company in North Carolina, Huff said, “and as a music therapist, she is my constant reminder about why I pursued music in the first place. Music is one of the few things in this world that brings people together. It is malleable, and can be whatever you need it to be in the moment. It is a form of expression, an expression of self.”

For anyone interested in taking guitar lessons from him, Huff said the best way to contact him is via his website, www.matthew-huff.com. His upcoming performances and his albums and singles are also listed on the site.